In a rural world where there is more than enough work to go around, even the animals have jobs.

The cows are The Breadwinners, beginning their work day early to provide the milk that is the backbone of our income. On Sundays when there is no milk delivery they instead give us cheese and doce de leite and rice pudding and other delights, as well as milk that is pasteurized to last the week to help build the strong bones of the many children at the farm. Each child receives a cow in their name. As the cow matures and has her own children, the original cow and her offspring become a rural college fund.

Boneca, the Pinto pony, also is part of one child’s college fund. Most of the time she works as our rural All-Terrrain-Vehicle and when the city nieces and nephews visit the farm as our Amusement Park Ride.

The pigs are our Garbage Disposal Crew, devouring our orchard drops and vegetable scraps with happy munchings, crunchings, and snorts of gustatory delight as true as any gourmand’s. When their appetite has caused them to get too large for their quarters (or they get too wily to be penned or too much of a bully with the other animals) they make that ultimate sacrifice and provide another income for the family.

The chickens have a few jobs. As Nutrition Specialists, they give us eggs, glorious small eggs with brilliantly, creamy yellow yolks. Like summer tomatoes, these eggs are their own class and should not be paired with their pale, tasteless store-bought cousins. The chickens seem to be competing for an Employee of the Month award; they loudly announce to the world each time they drop an egg. My husband insists that their shrieks translate into: Batei-um-OUV-ro-Batei-um-OUV-ro! (I laid an egg!) and sometimes the rooster will answer the call: eu-quem-FIZ! eu-quem-FIZ! (and I made it!) The poor things aren’t too bright, a fact highlighted each time they start shouting which inevitably helps us humans to find the bush where they have hidden themselves and steal away this latest batch of eggs. They just can’t help themselves it seems; pride wins out over prudence every time.

The chickens are also integral to our Extermination Crew, keeping our insect population to a dull roar by eating insects and grubs of all kinds. Prudence loses again, this time to voracious appetite, and they haphazardly dodge the swings of our hoes to be the first to eat the ant hive exposed or the termite eggs unearthed. The chicks are most insistent and least talented at rushing over the newly turned earth, and at least one chick has received a glancing blow to the head as he failed to judge where the next hoe would fall. Fear not, he walked crooked for a week and now seems to be no worse for the wear albeit a bit more stupid than the rest, but which came first, the chicken or…? But I digress. I have heard that there is a particular Ghanaian chicken that even eats scorpions. For this reason I pray daily for an incognito African sister among our that our hardscrabble, multicolored lot. Their eating habits make it nearly impossible to plant seedlings, as the chickens in their quest for munchies will investigate and scratch mercilessly at any fresh dirt. Also it is for this reason that their secondary job responsibilities include serving as my Composting Crew, turning over my compost heap daily and with great relish.

The chameleon lizards that scrabble across our walls also work on the Extermination Crew, eating the endless mosquitoes. They also serve as Aerobic Trainers for the farm cat, who never tires of acrobatic leaps to try to catch them.

The frogs form an Orchestra that sings us to sleep nightly and round out the Extermination Crew, doing their share to consume our plentiful insect population. They settle into any area that is dark and cool, unfortunately this includes under our sinks and beds and inside the outdoor drains. Hard rains fill our veranda with a tide of froggy refugees, as their homes get flooded.

The dogs are the Security Guards of the farm, keeping a vigilant eye on the road at all times and guarding us as we sleep. They start barking anytime anyone nears the farm–including the cows who seem to be Public Enemy #1 in the dogs’ eyes. The dogs also have the side jig helping on the Garbage Disposal Crew, happily dispatching of any meat leftovers we opt to throw their way.

Of course I also should mention the farm cat, Lao, except that no one has quite figured out what Lao does other than chase the occasional moth or lizard who weren’t harming anyone in the first place. Our sole unemployment case on the farm, Lao is an enigma for another day. 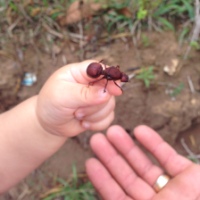