The dogs were barking up a racket last night. It was clear that there was something in the yard–they don’t bark like that when discussing territorial politics with the neighbor dogs–so we went out on the veranda with flashlights to investigate.

We were so glad that we did! We had a late night visitor, and if we had let the dogs continue their “welcoming party” antics much longer, everyone would have regretted it.

As it was, we got a good glimpse for the first time in our lives of a Brazilian porcupine. Even Mr. Crônicas who grew up on a farm had never seeon one!

I had seen the spines in the mouths of our dogs before, and figured that a porcupine was a porcupine. A lot of things look the same here. Opossums look like opossums back home. Rabbits do too. Armadillos look like they do in the southwestern USA. One more way that rural life is the same, no matter where you go. But the porcupines? WOW.

I was shocked to see how different this distant cousin looks from our Northeastern USA variety! 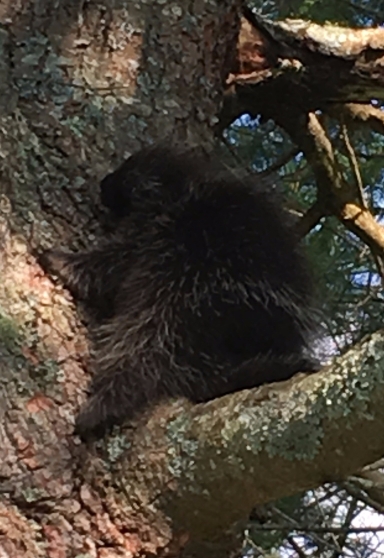 Looks cute and fuzzy, right? Especially compared to ours. 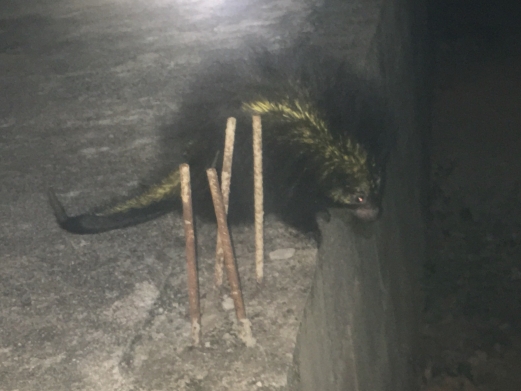 And again. CHECK OUT THAT BACKSIDE.

I’ve never seen anything like it. It looked like an opossum crossed with something prehistoric. All just hanging out on our porch-to-be!

Brazil. The land where everything has spines. It makes sense that the porcupines would have spines on top of their spines.

When 1 + 1 Doesn’t Equal 2
Next Post: Happy International Women’s Day! So why is a male politician talking?