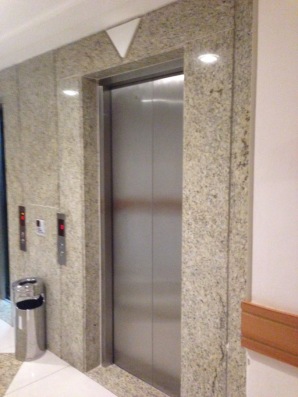 They were all waiting for the elevator: a businessman, a young man and his stylish wife. Three in a row, all staring at their cell phones.

The young man sighed and reached out to impatiently tap the “Up” button again.

The tall, thin Steve Buschemi look-alike in the business suit looked up. “It’s on strike,” he said.

(cultural translation: All the public banks are currently on strike and withholding all but the most basic services. Financial transactions are slow, slow, slow these days.)

The young man looked up from his Facebook feed and chuckled. “It was arrested,” he said.

They both grinned and said together: “Lava-Jato!”

Everyone had a good laugh for a moment. Then they returned to gazing at their cell phones. No one said anything more.

And, that, my dear readers I can’t help but feel somehow sums up Brazilian politics at the moment.

Racial Panels and a Drop of Blood
Next Post: 12 Things About Brazil the Guidebooks Never Tell You