This week, in the middle of the night, while all the press was looking towards Colombia, and the nation mourned the loss of a whole team of talented, young men, Brazil’s politicians gutted an anti-corruption bill.

The President declared three days of national mourning and the Congress took advantage of it. They went into overdrive and held an all-night marathon session aimed at protecting their own asses from the corruption police. They tried to protect themselves with amnesty from investigation (this provision ultimately failed). They removed the legal definition of what constitutes unlawful enrichment. They made it possible to sue and imprison judges and prosecutors who would investigate them. They shortened the statute of limitations so that they wouldn’t face jail time if accused. All this while the nation was in mourning. You really couldn’t imagine anything more dastardly or shameful.

There are no innocents in Brazilian politics

They did it because they’re all guilty, and they’re scared. Right on down the line.

In August they voted to impeach the president, Dilma Rouseff.

Shortly after that, her predecessor and mentor Luiz Inacio Lula da Silva (“Lula”) was also investigated and many of his private holdings were siezed.

Her vice-president Michael Temer took the seat of power and shortly after was acccused of asserting pressure on other politicians to get a luxury hotel deal to go through.

In September the Speaker of the House Eduardo Cunha, who was running Rouseff’s impreachment process, was also impeached.

This week the Senate president Renan Calheiros was indicted for corruption and the Senate voted to ignore an order from the Supreme Court to remove him from power. This led to 24 hours where no one knew exactly who was running the government. Finally a compromise was forged and he has been removed from the sucession to the presidency until cleared of charges.

Ex-Governor of the state of Rio de Janeiro Anthony Garotinho was likewise accused of corruption–buying votes to be specific. He then claimed chest pains and was admitted to a local hospital. Upon medical release, he had to be literally dragged kicking and screaming from the hospital and carried to prison. It has been an exciting past few months. 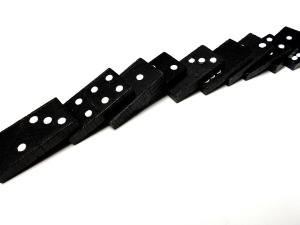 Across party lines, the Brazilian politicans are falling like dominoes.

When Dilma was being impeached and the town was boiling with anti-Dilma fervor, one friend of mine confessed that he actually supported her. Why? I asked. “They’re all dogs, Malvina,” he replied. “They all eat the cow and give the people the bones. But at least with Lula, the people got a few bones with some meat left on them.”

“They all eat the cow and give the people the bones. But at least [with the PT Party] the people got a few bones with some meat on them.”

And there you have it. At least someone was willing to call it as it was.

It happens on a local level too

See, at the same time that everyone was running around complaining about how corrupt politicians are, in our small town everyone was vying for: A) a job with the city, B) for the city to rent one of their apartment buildings, or C) for the city to contract to use their construction company. Everyone wants a better job for their brother, or more revenue for their family business. Corruption is horrible on a national scale, but fine if you personally benefit. That’s not corruption in the Brazilian frame of mind. Not on a personal level–that’s just getting ahead.

In our small town the political parties divide almost absolutely by family affiliation, who’s doing business with them, and who their friends are. The City Hall changes hands and fleets of government workers are laid off, only to be replaced with the ruling party’s friends. It’s no way to get anything done, but people only complain when they’re on bottom of the pile.

It’s great when election season comes around. City machinery runs around everywhere, government outreach workers do the rounds. The town over was drilling wells for free. That’s a great service. We’re in a drought, the surface springs are drying up, and drilled wells are prohibitively expensive for most rural folks. Our nieces got school bus service.

But then the elections happened, the ruling party spent money from the city coffers on their campaign, they lost, and now all services have ceased as they cut back in order to hand over a balanced budget. No more wells for thirsty citizens. Our nieces went back to walking the 1.5 miles back and forth to school every day.

Corruption is not just a 3rd World Problem

I don’t say this opinion to many people. I’ve hesitated a while in writing this crônica. I’m not from here. I don’t know who’s voting for who, and who I might be offending with my outsider’s assessment. But this is me calling it as I see it.

Right now I’m calling it at the top of my lungs–THIS IS WHAT CORRUPTION LOOKS LIKE–because how it starts is simple. It starts with knowing someone in power who can make your business deal easier by pulling a few strings or leaning on a few people. It starts when people in power have business holdings, and you can curry their favor by being their best customers. Before you know it, to succeed at business you need to know a politician. It happens when you dip into funds that aren’t yours to use, and then you dip again, until you forget that public monies aren’t your reserve banking account.

It’s so easy to say that extreme corruption is what happens in other countries. But once political favor becomes the main way for a business to be successful it’s all over. Then it becomes every person doing “just one little thing” to help their family, and no one is guilty and everyone is.

What is happening in my own nation is terrifyingly familiar. I watch the news with horror because news in Brazil and news in the United States are disturbingly similar. Just one is a only a toddling calf that some wonder how it could harm anyone, the other is a full-grown raging bull. Same cow, same bones. And this particular animal grows overnight.

Broken Hallelujah: on losing Leonard Cohen and the Elections
Next Post: ‘Merrica, Can We Talk?